Wikipedia describes Pollen as a “fine to coarse powdery substance comprising pollen grains”. Basically, pollen is the male side of things and is used to pollinate the female reproductive structure. We all know from school that bees collect pollen and nectar and make honey… But, did you know… 1. How important a role bee hair plays in pollen collection? 2. How much pollen bees can carry? 3. That bees have a very strict routine that is always followed when removing pollen…? 4. How important pollination by bees is for us humans? 5. That there are also cuckoo bees? And would you like to see a bee cleaning away pollen in real time and then slowed up 280 times so you can see exactly how a bee cleans itself?

How do Bees Collect Pollen – The Importance of Bee Hair

It makes sense that bees would have hair which collects the pollen as the bee moves from blossom to blossom. But did you know that they even have hair on their eyes which are there to collect pollen as well. According to the study by Georgia Tech the entire body of a bee is covered in hair, with different areas having higher density. The eyes have the least dense hair with the gaps between hairs being 45 micrometres or the size of a typical grain of dandelion pollen. When caught by the hair on the bee’s eyes, the pollen is suspended above their eyes and is cleaned away by the bee’s forelegs.

How Much Pollen Bees Can Carry

Bee’s forelegs have five times more dense hair than what is on the eyes of a bee and thus they collect far more pollen. The Georgia Tech study estimated that bees have around three million hairs across their bodies. Utilising these hairs, bees can carry up to 30% of its own body weight in pollen.

This video from Georgia Tech shows you a bee coated in pollen and how he cleans himself both in real time and in slow motion so you can see every little detail. The first part of a bees cleaning routine is to use each of its front legs to wipe its eyes – 6 times for each leg. Then the pollen from the forelegs and other legs and the rest of the body is removed by using their mouths and other legs. The study using high speed cameras determined that bees removed as many as 15 thousand pollen particles from their bodies in just 3 minutes.

The Importance of Pollination

Whilst bees do make use of the pollen that they collect, the most important role for us (humans) of their collection of pollen is the process of pollination. Pollination is the result of bees carrying genetic material in the form of pollen from one flower to another. This pollination allows the plants to create seeds and thus reproduce. Without bees pollinating plants, reproduction of some plant species would be impossible and our food supply would be severely reduced. We will cover this vitally important information in a blog soon.

What are Cuckoo Bees?

Just like cuckoo birds, cuckoo bees have obtained their name because they too deposit their eggs in another’s nest. Thus the cuckoo bees once hatched survive by eating the pollen that was collected by the hosts for their own young. Unfortunately, sometimes the cuckoo bees will also eat the unwilling hosts’ offspring as well.

Why do Humans eat Bee Pollen?

Bee pollen a source of protein and is considered a complete food. It is high in free amino acids which are easily used by the body. One teaspoon of bee pollen would take a month for a bee to collect working eight hours a day. So we are very grateful for the work they do to create such an amazing food. 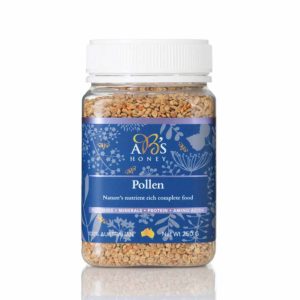