This totally natural product has a delicately spiced Cinnamon scent and the underlying Manuka flavour. It’s a blend treasured by true honey lovers seeking only the highest quality pure and natural Australian honey.

375g jars are glass and have their lids taped for safe transportation.

About the AB’s Honey with Cinnamon Gourmet Blend

The spice infused in the AB’s Honey & Cinnamon blend is true cinnamon. We use only Sri Lankan cinnamon rather than the common, inferior, and less expensive Cassia cinnamon. Sri Lankan (Ceylon) cinnamon is a premium spice that has been prized for centuries for its medicinal qualities as well as its delicate sweet flavour and spicy aroma. Manuka Honey and Cinnamon is especially good for easing nausea, coughs and phlegm and is antibacterial and antifungal.

AB’s Manuka Honey, which is part of the cinnamon and raw honey mix, is the highest quality Australian Manuka Honey with a strength of MGO 500+ ( the naturally occurring methylglyoxal content). This raw pure Manuka Honey is free from all pesticides and chemicals and is sourced from Australian Leptospermum trees. You can find out more about the wonderful uses of Manuka Honey here in our blog.

The last ingredient to this gourmet blend of cinnamon & honey is AB’s Natural Ironbark Honey, a pure natural honey with a sweet smooth taste sourced from the open forests of Eastern Australia.

When you buy cinnamon honey from Simply Honey you are buying the best quality natural and real Australian Honey, produced by AB’s Honey in Queensland.

This gourmet honey blend is sweet, spicy, and smooth. The cinnamon floats to the top of the honey so we recommend giving it a good stir before spreading on your toast or spooning into drinks. 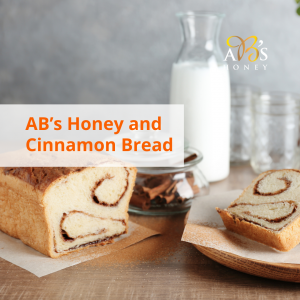 Totally delicious on fresh bread or warm toast, in coffee and tea, drizzled over natural yoghurt or ice-cream, stirred into porridge, and for adding for an extra tang add when baking banana bread, raisin bread, apple bread or cinnamon bread itself. You can use AB’s blended Manuka Honey and Cinnamon dissolved in a glass of warm water for a soothing tonic. It has a dreamy dessert-like flavour ideal for sweets and pastries. It also makes a delicious dip for crisp apple slices.

Like all of our raw honey products, you can enjoy our Manuka Honey and Cinnamon straight from the spoon.

100% pure, raw, Australian honey, naturally produced by bees and brought to you by Australian Beekeepers.

Due to legislation in New Zealand, Western Australia, Norfolk Island and Kangaroo Island, we are unable to deliver AB’s Honey and Cinnamon (or any other honey products) to these areas.

When buying products in glass jars, our team will carefully seal your honey jar lids with tape and package accordingly before they leave our warehouse. Unfortunately, we cannot prevent leakages caused during transit time and as such, we cannot replace or provide refund for these items. We appreciate your understanding.