Budding entomologist or apiarist? Here are some interesting facts about bees!

Bees have been making honey for somewhere between ten to twenty million years.

One bee colony can pollinate 300 million flowers each day.

One bee can pollinate 5000 flowers a day.

Bees are responsible for around 80% of all pollination worldwide.

It is believed that bees are attracted to the colours yellow, purple or blue. 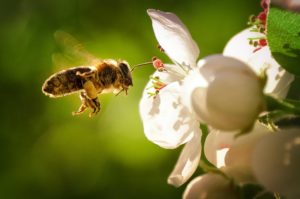 There are over 1500 different species of native Australian bees, some of which are as tiny as 2mm with the largest being around 24mm.

It is thought that a honeybee produces just one half of a teaspoon of honey throughout its entire working life.

Bees communicate with each other through pheromones and the waggle dance!

Without bees we would have no almonds, as almonds are totally dependent upon bee pollination.

If a bee colony is short of food, the drone bees (which are males) are exiled from the hive.

There are on average around 55,000 worker bees in a bee colony.

A honey bee’s wings flap 11,400 times a minute, which creates the bee buzz.

A queen bee lives for up to two years.

A worker bee lives around 45 days during summer, and less in winter.

All worker bees are females, the only male bees are the drones.

Honeycomb cells built by bees can support twenty-five times their own weight.

In the 30th Century BC in Egypt honey was highly prized and was fed to sacred animals.

In Greece in the 7th Century BC honey was an offering made to the gods and spirits of the dead.

Honey is referred to in the Bible with the reference being “the land of milk and honey” in Exodus 3:8.

There is evidence that honey was used as a medical treatment as far back as ancient Mesopotamia.

There is clinical evidence that raw honey is a superior treatment for wounds than modern wound care dressings.

Honey is the only food that humans eat that is produced by an insect.

Raw honey does not go bad (spoil) as it contains natural preservatives. Indeed, it is believed that a pot of honey was found in an ancient Egyptian tomb and was still safe to eat. (Whilst this ‘fact’ is often quoted, there is no source, so whilst it might be true, it cannot be qualified as such).

Beekeepers only remove the honey that the bees do not need. This can be as much as 45kg from just one hive!

The flavour of honey is created by the type of flowers (nectar) that the bees use to make it.

Bees have been found to be producing blue and green honey in France, thought to be as a result of them feeding on the brightly coloured sugar waste of an M&Ms factory.

In classical Greek, the word “drunk” means “honey intoxicated” most likely due to the fermenting of honey (mead) to create an alcoholic drink.

Finally given your interest in honey and bees, here are some (rather bad) honey jokes for you…

What does a bee use to style her hair? A honey comb!

What are the cleverest bees? Spelling bees!

Where do bees go after they get married? On a honeymoon, of course!

Why does a bee go to the dermatologist? It has hives!

What do bees wear to the beach? Bee-kinis!